Ghost towns and fossil remains: following the archaeological traces of Artena and Colleferro

What is it that links Artena and Colleferro, two medium-sized municipalities located in the Valle del Sacco, east of the metropolitan province? They are linked by the archaeological traces of the still unknown towns or buildings that have disappeared. In fact, it is on the footsteps of history – both ancient and recent – that our visitor will travel on the following itinerary!

The tour starts at the Piano della Civita archaeological area, about 1 km away from the medieval town of Artena. In a spectacular landscape setting with a panorama that sweeps from the Pianura Pontina through the Castelli Romani to the Monti Prenestini and the Valle del Sacco, tourists can visit the ruins of a late archaic and mid-Republican settlement that was abandoned in the first quarter of the 3rd century BC and whose name, however, is still unknown. Inside, there are substantial remains of the polygonal wall and a monumental central terrace, behind which are the ruins of a rustic Roman villa. The archaeological area of the Piano di Civita is closely connected with the ‘Roger Lambrechts’ Archaeological Civic Museum, the second stop on our itinerary. Housed in the 18th-century Granaio Borghese and named after the Belgian archaeologist who conducted excavations in this very area for more than twenty-five years, it holds remains from the Piano della Civita area and the surrounding countryside. Prominent in the collection is the Soldier’s Head with Helmet, fully in the round and cast in light sandblasted earthenware, comparable to – both in subject and date – other examples found in southern Lazio from the early 5th century BC. From the museum, our visitor concludes the first part of the itinerary by strolling through the streets of the historic centre of Artena, whose beauty can be perceived not only in its peculiar medieval urban layout, but also in its houses. Featuring small narrow windows, they are perched along the ridge and reachable by steep stairways and alleys. Immersed in the narrow streets, it is easy to grasp the compactness of the village, which actually seems more like a fortress, hence its original name of ‘Montefortino’. This was its name from the time of the rule of the Counts of Segni and was only replaced by the present one in 1873. The route ends at the Collegiate Church of Santa Croce, built in the Middle Ages but completely restored in 1659 by the architect Domenico Terzago at the behest of Prince Giovan Battista Borghese. From here our visitor can, one last time, enjoy a wonderful view at roughly 420 m above sea level. 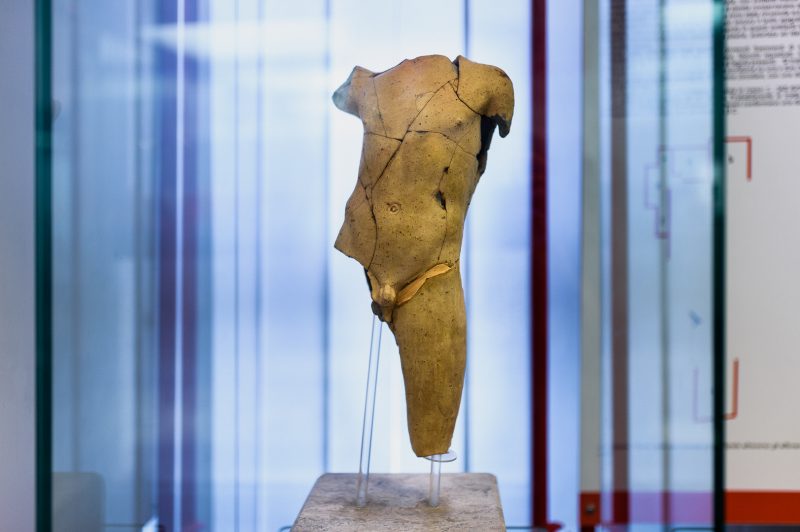 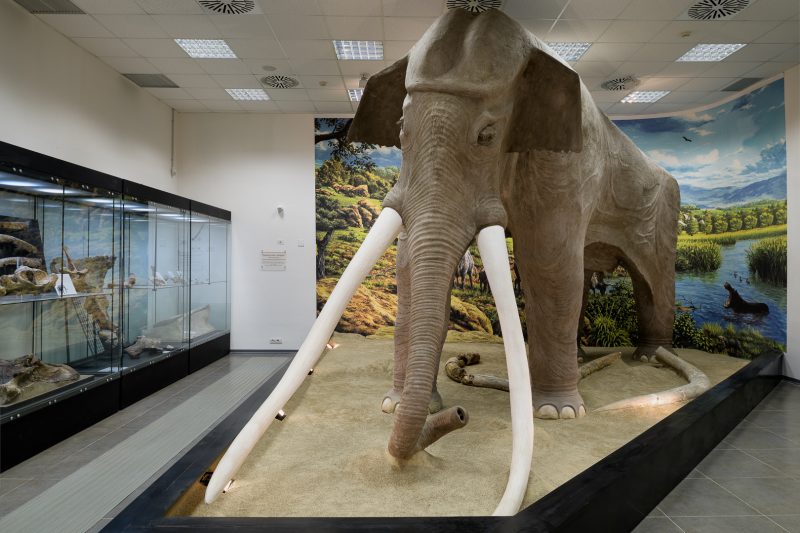 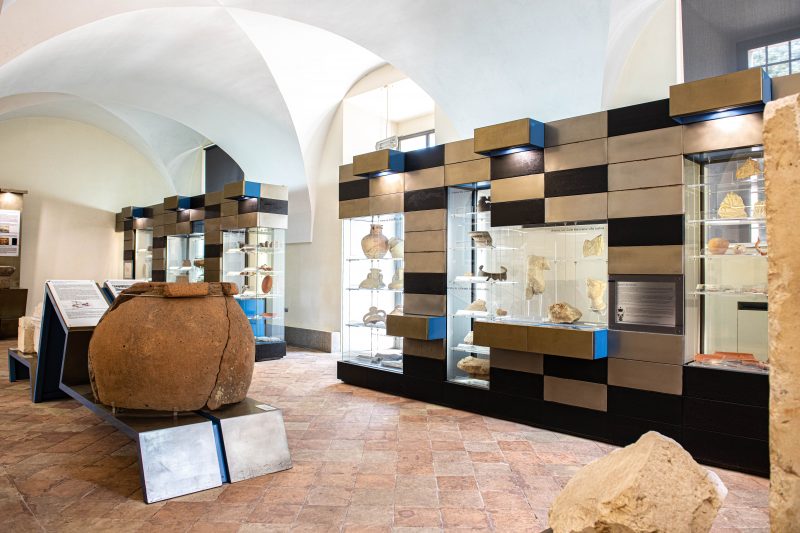 It is now time to move on to the town of Colleferro, located on the border with the province of Frosinone. Although the name of the town has nothing to do with iron (ferro) but rather with the conversion of the phonetic value of the F into V, an important deposit of fossil fauna has been found in the area of Colle Pantanaccio. These are kept at the Archaeological Museum of the ‘Toleriense’ Territory in Colleferro, the first stop of the second part of this itinerary. Located in the former B.P.D. factory, the museum is divided into five main thematic sections, each dedicated to a historical period: palaeontology, prehistory and protohistory, the archaic period, the Roman period and the early Middle Ages and Middle Ages. What impresses even adult visitors is the palaeontological section in which not only Pleistocene animal fossils are on display, but also, most notably, a spectacular full-scale reproduction of a straight-tusked elephant (Palaeodoxodon antiquus). The mediaeval section, on the other hand, houses finds from the area’s castles, in particular those from the excavations of the Castello di Piombinara (12th-18th century) and it is precisely to the remains of the church of S. Maria di Piombinara that our tourist heads once the museum visit is over. Belonging to the castle of the same name, we first hear of this church in the 12th century. Knocked down after the war to make way for the Via Casilina along which it stands, all that remains of it today is the square-plan bell tower made of irregular blocks of tuff and an archaeological area excavated and developed by the Archaeological Museum in collaboration with the pertinent Soprintendenza.

The church of Piombinara is not, however, the only ‘ghost building’ in Colleferro. It is also worth mentioning the Castello Vecchio, the last stop on our itinerary. Situated on the top of a hill at 245 m above sea level, it is accessed through a vaulted corridor that leads into the central courtyard onto which the different parts of the mostly rectangular structure open up.  No definite information is available on its origins, but its history is thought to be linked to the Conti family and therefore attributable to the beginning of the 13th century. Destroyed and rebuilt several times over the years, it suffered serious damage in the 1915 earthquake before finally coming into the possession of the municipality of Colleferro in 2020 when it was purchased by the Furlan family. After the purchase, extensive cleaning of overgrowth and the removal of a dump from the last century revealed the remains of a polygonal structure from the Republican period and a presumably early medieval church which can be visited by guided tour.

– We recommend visiting Artena in August for the Palio delle Contrade, a popular folkloristic event during which games, customs and traditions of the town’s 20th-century agricultural tradition are re-enacted. The palio is also an opportunity to taste some of Artena’s typical dishes, such as gnocchi lunghi, polenta with ribs and lamb skewers, all accompanied by a glass of good wine.

– In addition to its archaeological history, Colleferro has a strong 20th-century history as evidenced by the città morandiana and the air raid shelters that extend for no less than 6 km beneath the town.

Hours: by reservation at the Archaeological Museum of the ‘Toleriense’ Territory