“Visions of landscapes in art, science and literature”

Carried out during the year 2019 thanks to funding from Regional Law no. 26 of 23 October 2009 – Avviso Pubblico “La Cultura fa Sistema”, ‘Visions of landscapes in art, science and literature’ is a large-scale project involving fourteen museums of the System.

From a collective discussion as to what constituted the common denominator of the “Museumgrandtour”, it was the landscape that emerged as the trait d’union capable of expressing a wide and heterogeneous territory in a transversal manner in which numerous museums differing in type, layout and content are found. In the various venues that hosted the project, this theme was therefore developed according to terminology and communication methods adapted to different contexts and materials on each occasion. The many initiatives implemented in the territory have been collected in the new series The Notebooks of the Museum Grand Tour. 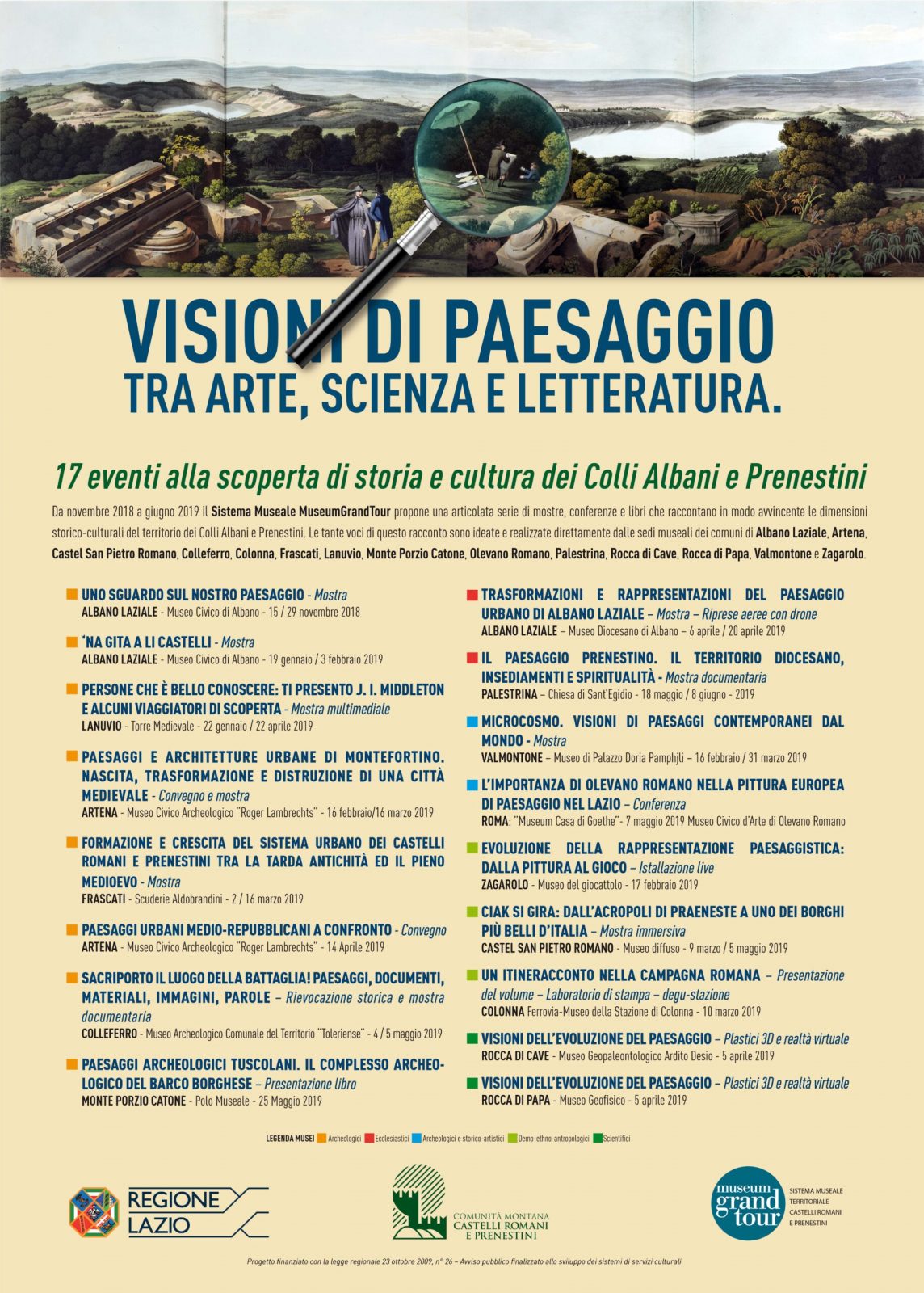 The scientific museums of Rocca di Cave and Rocca di Papa narrated the long geological and evolutionary history of the area of the Castelli Romani and Prenestini through 3D models – from the coral reefs and dinosaurs of the Upper Cretaceous, the Vulcano Laziale, the glaciations and changes in the coastline, up to the present-day landscape. In the Civic Museum of Albano Laziale, the story of the anthropological evolution of the landscape – and not only – was told through photography in two wide-ranging exhibitions; in the Medieval Tower of Lanuvio, a multimedia exhibition dedicated to the great travellers of discovery of the 19th century (Middleton, Dodwell and the erudite Marianna Dionigi) was hosted. The ‘Roger Lambrechts’ Archaeological Civic Museum addressed the theme of landscape from a historical-urban perspective, dedicating two study conferences accompanied by documentary exhibitions – one on the medieval origins of the Artena settlement and the other on the urban contexts of Latium in the Middle Republic compared to the Piano della Civita settlement in Artena. The exhibition Formation and Growth of the Urban System of the Castelli Romani e Prenestini between Late Antiquity and the Middle Ages, held at the Scuderie Aldobrandini in Frascati, posed an interesting question: How do history, archaeology and art chart the reconstruction of the settlement system? The Museum of Palazzo Doria Pamphilj in Valmontone proposed a contemporary interpretation of the landscape by hosting Microcosm. Visions of contemporary landscapes from around the world, an international exhibition with works by over 40 artists that engaged in a dialogue with the 17th-century allegories of the four continents frescoed in the vaults. The Colonna Railway Station Museum produced Un itineracconto nella campagna romana, a research project and volume presented together at an artisanal printing workshop, Un paesaggio in carta e inchiostro, produced in a limited edition for the occasion.

In Colleferro, two days of historical re-enactment brought the famous Battle of Sacriporto to life with landscapes, documents, materials and images. The Diocesan Museum of Albano Laziale instead chronicled the transformations and representations of the urban landscape through lectures, illustrative panels and a video in order to present, from a decidedly evocative point of view, the city as a whole. The Olevano Romano Civic Museum of Art celebrated its thirtieth anniversary with a conference held at the Goethe House Museum in Rome dedicated to the many pictorial testimonies of the Olevanese landscape over two centuries of art history. Castel San Pietro Romano, with its Museo Diffuso, hosted an immersive exhibition that accompanied the visitor through the transformations of the urban landscape from Antiquity to the present day. Finally, the Prenestine Diocesan Museum of Sacred Art presented the Prenestine landscape, diocesan territory, settlements and spirituality in a documentary exhibition aimed at highlighting the evolution of the diocesan identity in the Prenestine territory beginning with the testimonies of the martyrdom of Agapitus.