Stories of countryfolk, artisans and cyclops: through the historical centres of Gavignano and Alatri in search of local traditions.

4.Acropolis of Civita and the Cyclopean Walls (place of interest II-Alatri)

5.Church of San Francesco and frescoed room with Christ in the Labyrinth (place of interest III – Alatri)

Linked by a strong rural and artisanal tradition, Gavignano and Alatri are the two easternmost municipalities of the MuseumGrandTour Museum System. This itinerary takes our visitors on a journey to discover the history and local traditions of two towns located on the border between the provinces of Rome and Frosinone, revealing anecdotes and myths of their origins.

We begin in Gavignano, a municipality of just under 2,000 inhabitants located in the Monti Lepini where the Rio and Sacco rivers meet. Its Roman origins are confirmed by the presence of numerous archaeological finds in the Rossilli area – including a mosaic of Alexandrian origin – and the documented presence of numerous patrician villas along the consular roads. The peak of the town’s development, however, occurred in the Middle Ages when numerous churches and abbeys were built, including the renowned and still-standing Rossilli Abbey. These were coupled with the building of castles and strongholds which resulted in Gavignano taking on the appearance of a castrum with walls and a mastio (tower) around which the Palazzo Baronale was later built. Of notable grandeur, it was remodeled several times over the centuries to the point that the history of its construction accompanied the construction of the town, with Amato Conti (1044), Innocent III (1161) and Cardinal Pietro Aldobrandini (1621) each taking turns in the residence. The tour starts at Porta Napoletana where our visitor plunges into the narrow streets of a marvelous medieval town centre made of local stone, enjoying the view of numerous manor houses and buildings. Strolling through the streets, the attentive tourist becomes immediately aware of the peculiar juxtaposition of the cluster of small medieval houses of two, or at most, three storeys on one side, and the grand scale of Palazzo Baiocchi on the west side and Palazzo Traietto on the south-east side of the town. In the heart of Gavignano is the Museum of Rural Life, housed in the Palazzo di Corte. Created with the intention of reconstructing the history of rural and artisan life at the beginning of the 20th century as opposed to a simple exhibition of objects, the museum is a place to experience a distant way of life as if it were alive and near. Several exhibition spaces recreate the aspects of life dedicated to the work, home and care of family of the first inhabitants of Gavignano and the neighbouring villages that became autonomous after the unification of Italy. The objects chosen as representative of 20th-century rural everyday life are the plough, the clock and the bell. Following these are spaces dedicated to the typical work of the period and a second room dedicated to the reconstruction of the humble rural home environment and the traditional work of the housewife. Finally, the last rooms are dedicated to entertainment and the choral and musical arts. 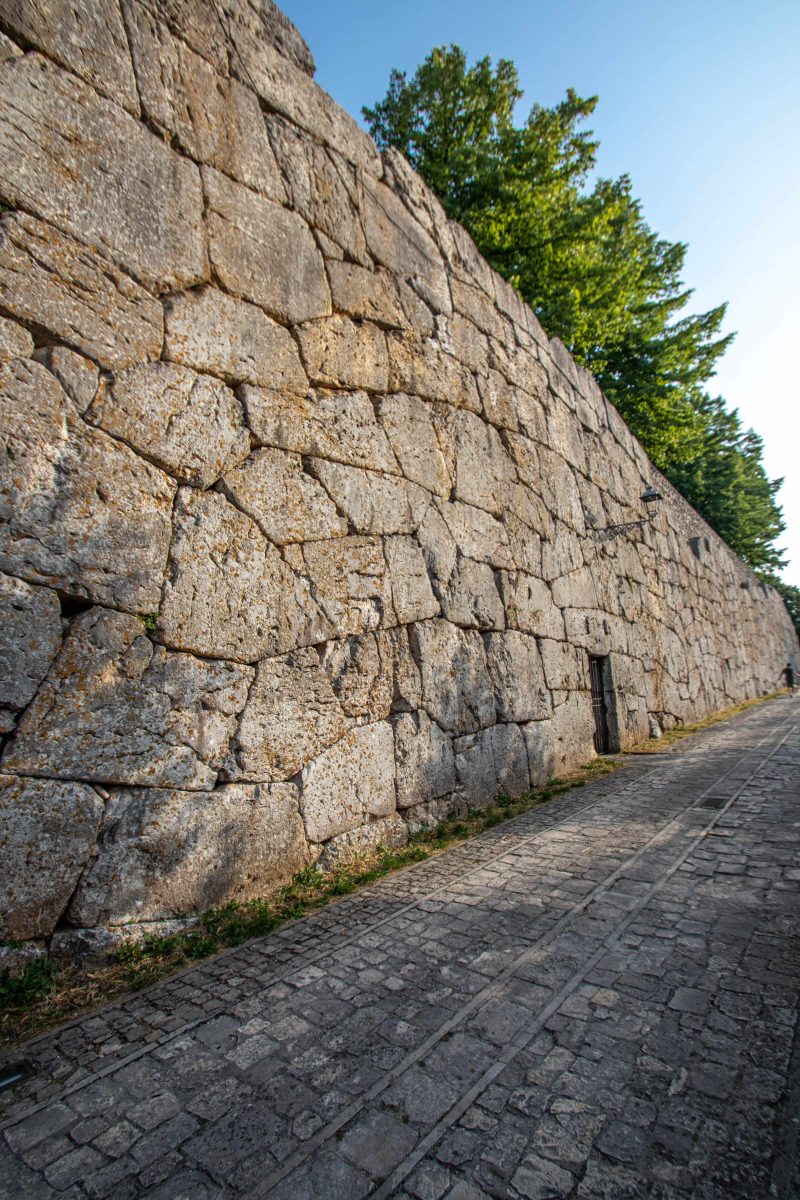 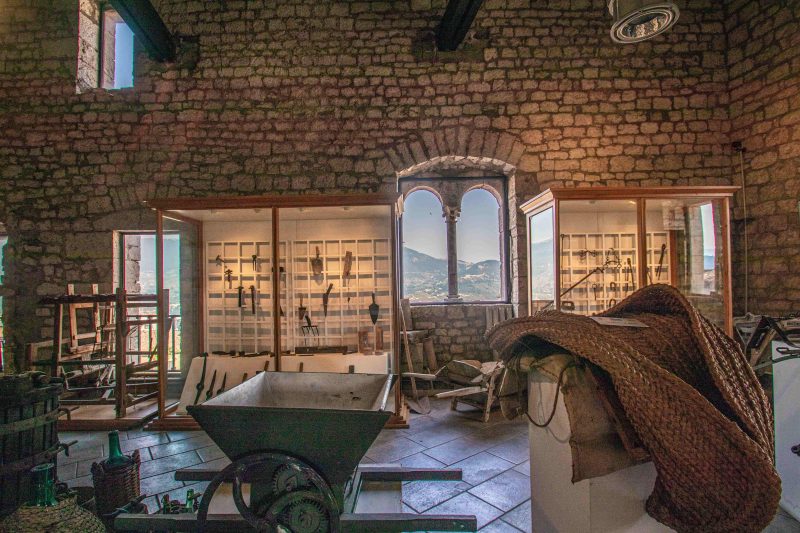 After Gavignano, our visitor can proceed to Alatri, one of the most beautiful and noble cities of art in southern Lazio, whose charm is amplified by the remarkable coexistence of archaic monumental elements and those dating back to subsequent eras, most notably the Middle Ages. The first stop of the second part of the itinerary is the Civic Museum. Here as well is a demo-ethno-anthropological collection of tools and equipment related to the local agricultural and artisanal tradition, located on the third floor. Housed in the mediaeval Palazzo Gottifredo in the heart of Alatri’s historical centre, it is divided into various sections spread over the different floors of the tower-house: on the ground floor, a polychromatic floor mosaic with geometric decoration from 80-90 BC in the ‘Voyagers of Discovery’ section; on the first floor, the section on ancient Aletrium with epigraphs and archaeological finds from the surrounding area; in  the mezzanine, a section dedicated to Etruscan art. In addition to its medieval history, however, Alatri is known above all as the ‘City of the Cyclops’ thanks to the exceptional state of conservation of its Acropolis of Civita and the Cyclopean Walls that encircle it, the true symbol of the megalithic cities of Lazio to which mysteries and legends have always been linked. Situated on the top of the hill, the acropolis is notable for its polygonal walls made up of several layers of differently-shaped megaliths, often up to 3 metres high, made to fit together perfectly without the use of mortar or concrete. With a perimeter wall 2 km long and preceded by a flight of steps, the acropolis can be entered through two gates: the Porta Maggiore and the Porta Minore. In addition to the first wall is a second one, again in polygonal construction and concentric to the acropolis, but wider, in which as many as five gates, originally topped with monolithic architraves, opened. Of these, only the Porta di San Benedetto still remains. The gothic Church of San Francesco (13th-14th century) is particularly representative of the medieval character of the city of Alatri, and a convent which was annexed to it is now used as an exhibition hall. Located there in a narrow cavity is a fresco by an unknown author depicting a Christ Pantocrator at the centre of a labyrinth of eleven coils and twelve circles which measures 140 cm in diameter. Considered an iconographic unicum, it is thought that it may have been connected to a Templar presence within the city’s fortified walls. 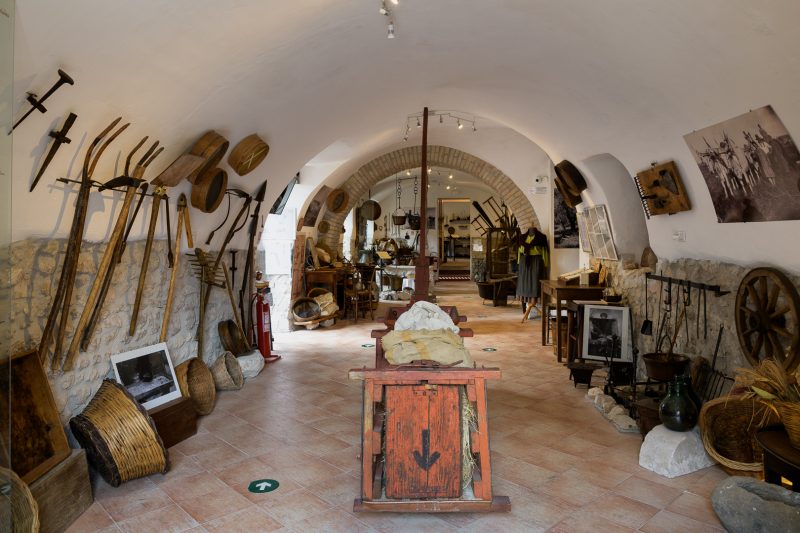