Starting from Rocca Priora, tourists begin in Piazzale Zanardelli, the town’s famous ‘belvedere’, from where both the 11th-century Rocca Savelli and the infinite panorama, which extends from the sea all the way to Rome and as far as the Monti Prenestini, can be admired. From here on the left, one can see the entrance to the Monsignor F. Giacci Cultural Centre, a 19th-century historical building where the Municipal Library and the Benedetto Robazza Museum are located. The result of a considerable donation of works made by the artist Mario Benedetto Robazza to the municipality of Rocca Priora, the focal point of the centre is the external courtyard where the large marble frieze L’Inferno di Dante (1994) is housed. Leaving the museum, visitors can find the Cathedral of S. Maria Assunta in Piazza Umberto I. It was consecrated by Cardinal Bessarione in 1464 on the remains of an ancient Roman temple dedicated to the Dea Fortuna and features frescoes painted in 1972 by Ugolino da Belluno.

Branching off from the cathedral, which is located on the highest point of the Rocca, there are numerous characteristic alleyways where the tourist is bound to come across many works by Robazza. Among the streets within the medieval entry arch – of which the hooks of the original wooden door still remain – are the stations of the Via Crucis in marble-resin, and continuing towards the urban centre one notices the fountain of the Triumph of Good over Evil and the Fountain of Narcissus, both in bronze.

Upon arriving in Viale degli Olmi, tourists conclude their journey in Rocca Priora at the Sanctuary of the Madonna della Neve, a place of worship of great importance to the town because of the snow market conducted on a large scale here between the 17th and 19th centuries.

Once at Rocca di Papa, the itinerary begins at the Campi d’Annibale, the highest point of the Rocca. Descending a little, one will immediately come across the Annibaldi Fortress. The earliest records of the fortress date back to medieval times when Pope Benedict IX, expelled from Rome in 1044, is said to have taken refuge here. Because of its natural strategic position, Rocca di Papa was an extremely important medieval fortress in the Roman countryside and was controlled by several Roman families: the Annibaldis were succeeded by the Colonnas, who countered the attempts of the Orsinis, Caetanis and Borgias to take possession of the site. In 1577, the site was almost completely destroyed by fire, and it was progressively abandoned and used as a quarry and agricultural area.

Tourists can immediately appreciate the privileged position of the fortress and the marvelous panorama of Rome that can be admired from it. Not far away, tourists wishing to better observe the landscape and the skies can pay a visit to the Geophysical Museum, which has a terrace equipped with a telescope for nocturnal observations. Managed by the INGV, the museum offers a journey into the earth sciences through interactive and digital displays, retracing the stages of scientific research and the disciplines that study our planet.

Moving into the heart of the village, tourists can delight in discovering the murals that adorn the alleyways of the historic centre. In fact, thanks to the creativity of the painter Miro Fondi, the village has welcomed numerous works of street art from as early as the 1980s. Since then, local artists eager to make their contribution to the rebirth and the cultural and artistic growth of the village have continued the project. Today, the historic centre has dozens of murals featuring a wide variety of colours and themes.

Arriving in Piazza Duomo, the itinerary ends with a stop at the 17th-century Cathedral of S. Maria Assunta, dating back to 1664 and designed by the architect Antonio Del Grande at the behest of Cardinal Girolamo Colonna. Following his death, work stopped for over 65 years, only to begin again in 1731 thanks to the generosity of the patron Pietro Ottoboni and Pope Clement XII.  The resumption of work was first entrusted to the architect Pietro Passalacqua and then to the architect Domenico Gregorini, with its consecration taking place in 1754. Over the years, the cathedral has been the focus of dramatic events including the devastating earthquakes of 1800 and the bombings of World War II. Rebuilt each time, it has become a symbol of resilience for the entire community. Inside, many works by great artists, including Perin del Vaga (1501-1547), Corrado Giacquinto (1703-1766), Domenico Tojetti (1807-1892), and T.W. Achtermann (1799-1884), are preserved. 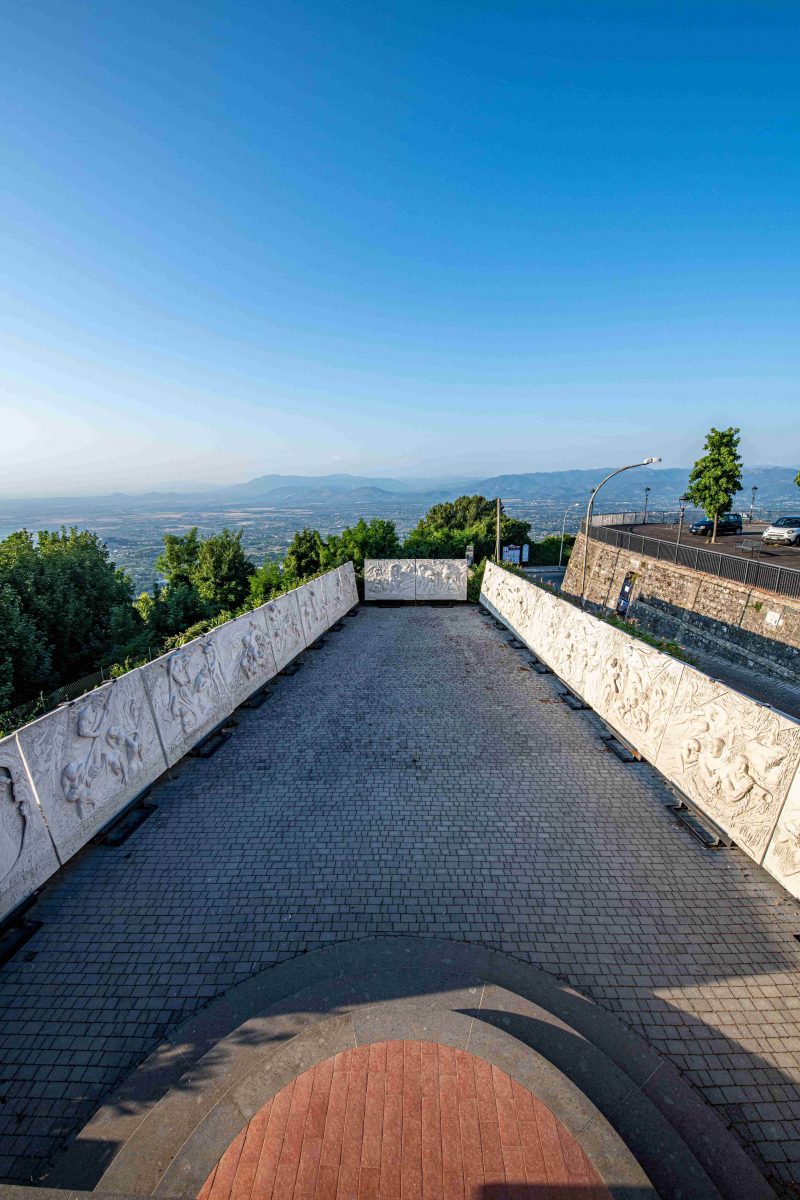 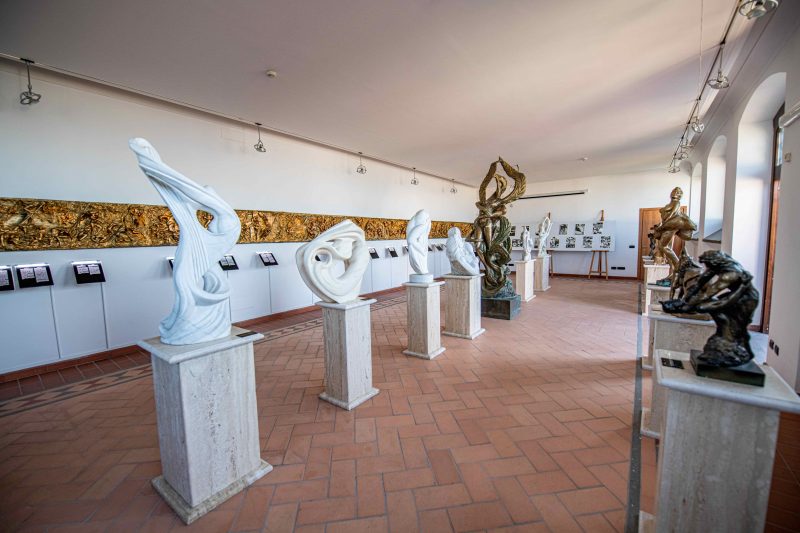 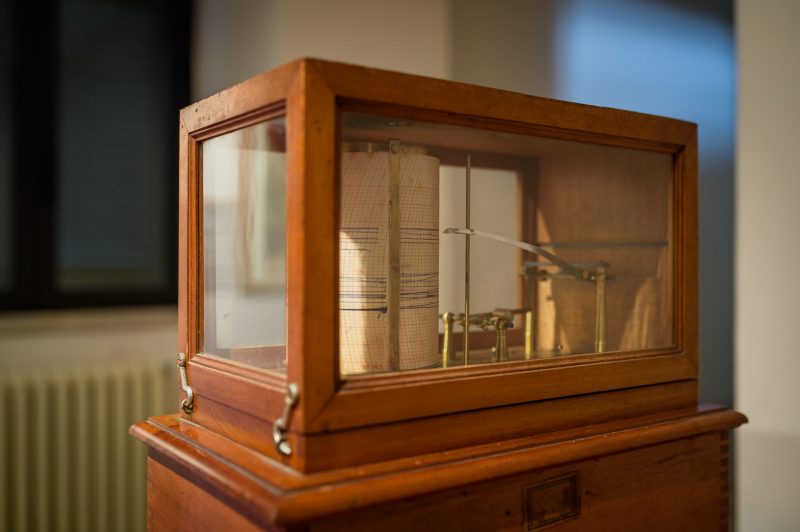 – If one wishes to get away from the chaos of the city, admire sweeping views and find relief from the summer heat, one will find everything they are looking for in Rocca Priora and Rocca di Papa. The two ‘Rocks’ – at 768 metres and 680 metres above sea level, respectively – are, in fact, the highest towns in the Castelli Romani. We therefore advise undertaking this itinerary during the summer, when the two villages are at their most vibrant owing to the festivals and open-air events. 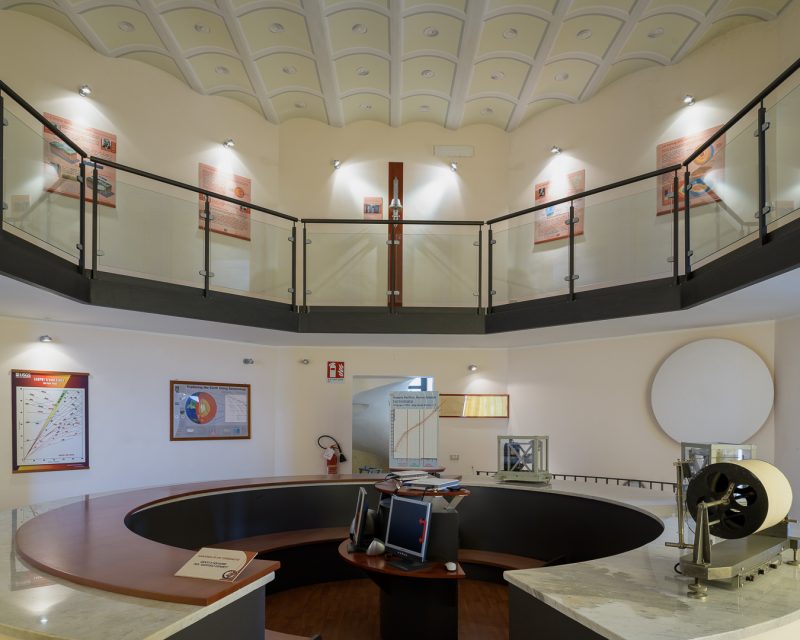