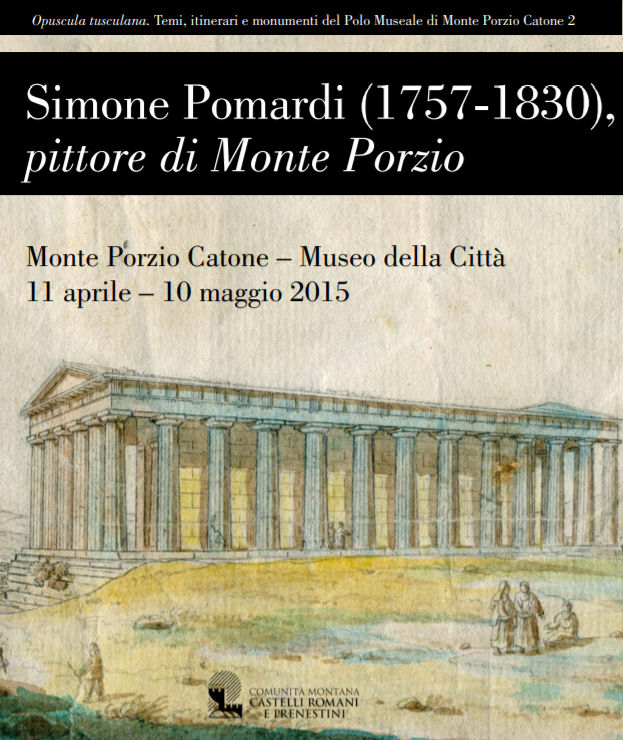 The publication of this catalogue is the final act in a series of initiatives promoted by the Museum Complex of Monte Porzio Catone to celebrate Simone Pomardi, a renowned painter from the same town.

Living in the period between the second half of the 18th century and the first half of the 19th century, Simone Pomardi has received proper attention only in recent years thanks to the monographic study dedicated to him by Pier Andrea De Rosa, and to the magnificent exhibition of his extremely fine watercolour drawings made in Greece in the company of the English archaeologist Edward Dodwell, which was held in Rome at the Curia in 2013.

The ‘discovery’ that the first prints depicting the excavations of Tusculum (published by Antonio Nibby in 1819) had been drawn by Pomardi, along with their purchase for the Collections of the City Museum, and the realisation that there were a number of collectors of his works in the community of Monte Porzio Catone, all prompted me to nominate Simone Pomardi as the theme of the event ‘I was here’, promoted by the Museumgrandtour – Territorial Museum System of the Castelli Romani and Prenestini. It was aimed at enhancing the link that a number of historical figures have had with our territory, and to venture to organise a small exhibition that would have the dual purpose of making the artist known locally and to study and classify the works on display from a different perspective than those proposed thus far. The initiative was also enriched by a wonderful conference held on 11 April 2015 in the hall of the Ephebeum multifunctional centre by Prof. Pier Andrea De Rosa, a great connoisseur of the artist who immediately embraced the event. At the end of this cultural initiative, the municipal administration decided to place a commemorative plaque on the building that was owned by the Pomardi family in the first half of the 19th century.