The Grand Tour through the modern and contemporary: the tradition of landscape painting in Valmontone, Genazzano and Olevano Romano

7.Woods of the Serpentara (place of interest IV – Olevano Romano)

Curious to step into the shoes of a true ‘grand tourist’, our traveller will find the ideal itinerary in Valmontone, Genazzano and Olevano Romano. Linked by a strong landscape painting tradition and by both modern and contemporary artistic patronage, the three towns dominate the valley where the river Sacco flows, still offering spectacular views of a limitless landscape.

We begin in Valmontone in the Museum of Palazzo Doria Pamphilj, which is divided into two sections – the first, on the ground floor, dedicated to archaeological finds discovered in the surrounding area, and the second, a historical-artistic section corresponding to the splendid cycle of frescoes commissioned by Prince Camillo Pamphilj between 1658 and 1659. Spread throughout the eleven rooms of the Palazzo’s piano nobile, the decorations present an iconographic programme depicting the allegories of the Four Elements and the Four Continents, created by Francesco Cozza, Pierfrancesco Mola, Giambattista Tassi and the great Mattia Preti who, in 1661, was called upon to decorate the ceiling of the Aria. Completing the tour is the marvellous trompe l’oeil landscape in the Salone del Principe frescoed by Gaspard Dughet in collaboration with Guglielmo Cortese. It is by viewing the frescoes in this long, narrow room that our visitor will most feel like a true Grand Tour traveller by being able to admire the landscape that could be seen from the large windows of Palazzo Doria at the time. Right next to Palazzo Doria Pamphilj is the Collegiate Church of Santa Maria Maggiore. Built between 1685 and 1689 by the architect Mattia De Rossi (Bernini’s favourite pupil), the majestic Collegiate Church dedicated to the Assumption of the Virgin into Heaven was commissioned by Prince Giovanni Battista Pamphilj in order to continue the ambitious project of creating an ideal ‘Pamphilian city’ begun by his father with the construction of the palazzo. The intervention of De Rossi – who also designed the palazzo – included demolishing the previous Gothic church and rebuilding a new church with an elliptical plan and a façade enclosed by twin bell towers, inspired by Borromini’s Sant’Agnese in Agone in Rome.

From Valmontone, we move towards Genazzano, stopping first at the Castello Colonna. Situated on a spur of tuff rock, it offers a marvellous view of the landscape that stretches from the Sacco Valley to the eastern mountains. The history of the castle, as its name denotes, is linked to the Colonna family who transformed it from a simple defensive fortress to a manor house of great artistic and architectural importance from the 11th century onwards and it was in 1639 that Cardinal Girolamo Colonna commissioned the interior frescoes. These include the ones in the chapel located on the first floor in the east wing where, as in Palazzo Doria, glimpses of the landscape that give an idea of the views of the time are depicted, along with sacred scenes. The artistic history of the castle was revived in modern times when it was purchased by the municipality in 1979 and restored, becoming a centre of attraction for numerous theatrical and contemporary art initiatives. These included Le Stanze (1979), the first artistic event curated by the critic Achille Bonito Oliva, in which the leading exponents of the Transavantgarde movement paticipated. Today, the castle houses the Castello Colonna Atelier Museum, made up of five sections: the Quadreria, the Museum of the Infiorata, the Museum of Popular Arts and Traditions, the Archaeological Museum and the Living Museum. The museum system with its Quadreria was inaugurated on 23 April 2022. It presents the works of Scipione Vannutelli and those related to the Genazzano Prize (1953 – 1970), with works by Calabria, Sughi, Vespignani, Guccione, Attardi, Turchiaro, Lippi, Mafai and others. Not far from the centre of the village, Genazzano still amazes the contemporary ‘grand tourist’ with the sight of modern ruins – the remains of the Nymphaeum of Bramante, an architectural complex dating back to the beginning of the 16th century attributed by Frommel to the great Renaissance architect Donato Bramante, perhaps commissioned by Cardinal Pompeo Colonna. The grandeur and magnificence of this imposing work, which combines the reminiscences of Roman classicism with the aspirations of Renaissance classicism, are intended to create an evocative and magical place, secluded on the edge of a stretch of water and surrounded by greenery, where the visitor can seamlessly merge with nature, evoking Arcadian impressions of the past. 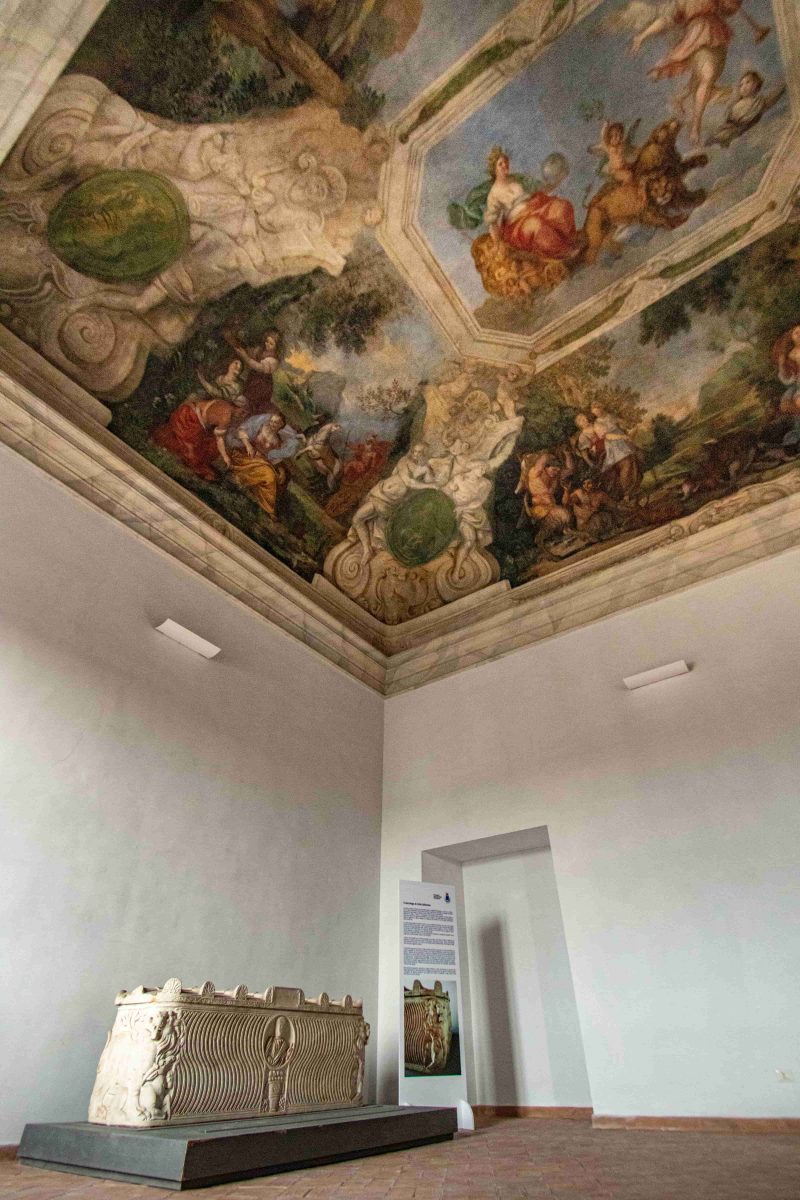 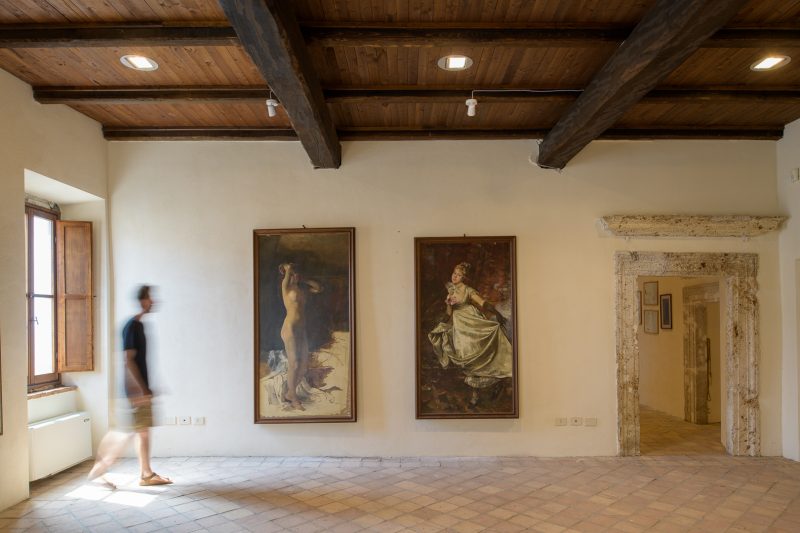 However, it is in Olevano Romano, the last stop of our itinerary in the Roman countryside bordering the province of Frosinone, that our traveller will find the contemporary traces of the landscape tradition of the Grand Tour. At the Olevano Romano Civic Museum of Art housed in the historic Villa de Pisa, one can admire a large collection of works that testify to the profound cultural tradition that, starting in the early 19th century, placed this small town at the centre of interest of numerous European artists fascinated by the beauty of the landscape and the authenticity of local customs and traditions. Among those on display are works by 20th-century and contemporary artists who have kept and continue to keep alive the tradition of the Grand Tour, a cultural phenomenon that still continues here. To better understand the wonder and amazement that ancient travellers must have felt at Olevano Romano, our tourist should set off on foot towards the historic centre. Perched on a spur of tuff rock, the village is striking for its cluster of local stone houses placed neatly one on top of the other, above which rises the tower of the castle also built by the Colonna family, who acquired the castrum from Pope Gregory IX in the 13th century. It is worth reaching the top of the village to enjoy a 360° panorama of the Sacco Valley below and the wilderness of the Woods of the Serpentara. Currently managed by the German Academy of Villa Massimo in Rome, the Serpentara was a source of inspiration for a large colony of European artists during the Romantic period who found inspiration for their creations in the pristine nature.

-We recommend this itinerary in the first week of July on the Sunday of the ‘Feast of the Sacred Heart’ when the traditional Infiorata of Genazzano takes place. Internationally famous with a history going back to 1883, it gives tourists the opportunity to participate in the composition of the floral carpet laid out along the streets by master floral designers.

-Passing through Olevano Romano – since 2007 the Strada del Vino Terra del Cesanese – our tourist must stop for lunch in one of the many renowned local trattorias to savour a fine glass of Cesanese red wine, once much appreciated by the popes and the noble families who resided in the territory. 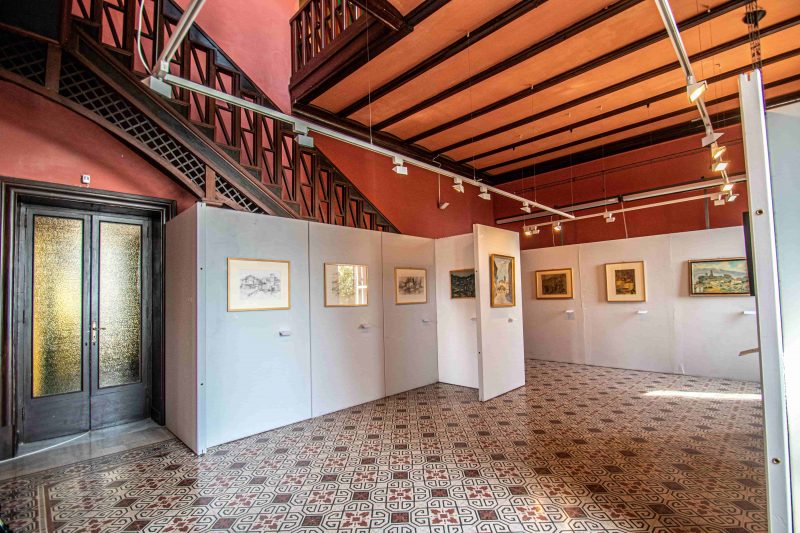