History through assonance: a walk between Lanuvium and Lavinium

2.Sanctuary of Juno Sospita (place of interest I – Lanuvio)

4.Fountain of the Rocks (place of interest III – Lanuvio)

5.Aulic Nucleus of the City of Foundation (place of interest IV – Pomezia)

8.Sanctuary of the XIII Altars and Heroon of Aeneas (place of interest VI – Pomezia)

About a 30-minute drive from one another, the cities of Lanuvio and Pomezia have an archaeological history that seems to link them not only by similarity of name. Myth has it that they were both founded around the 9th century BC. The former, known as Lanuvium, may have two origins: one by Diomedes, son of Tyldus, according to the Greek-Argic tradition, and the other by the trojan Fabio Pittore, who arrived in Italy after the Trojan War. Pomezia, on the other hand, is known to be the ancient Lavinium, the city founded by the hero Aeneas who landed on its shores after the burning of Troy.

The itinerary of our traveller who is curious about archaeology and contemporary history begins in Lanuvio in Piazza della Maddalena at the Lanuvino Civic Museum. It is here that evidence of ancient Lanuvium is preserved, including the oldest Latin alphabetario (6th century BC) and fragments of a fresco depicting scenes of Dionysian initiation. However, Lanuvio was also known for the presence of a large sanctuary from the first half of the 1st century BC dedicated to Juno Sospita, considered the most famous in Lazio regarding the cult of the goddess. The archaeological site of the temple is located in the park of Villa Sforza Cesarini, an Art Nouveau villa from the first half of the 20th century now housing the Municipal Library. Also linked to this are the remains of three cylindrical peperino blocks with engraved scales, probably related to the cult of the snake prevalent in the ancient city.

The end of ancient Lanuvium was marked by the Edict of Thessalonica (380 AD). Declaring Christianity the official religion of the Empire, it banned pagan cults and imposed the closure of temples, including that of Juno Sospita. This brings us to the medieval history of Civita Lavinia founded in the mid-10th century AD by Benedictine monks, who built no less than five towers that still stand today. Prominent is the picturesque Torre Maschia in Via della Libertà, consisting of a massive cylindrical body with an external crenellated walkway. Known as the Tower of Porta Romana, it bears the coat of arms of Pope Victor III to whom the reconstruction of the town is most likely attributed. Owned by the heirs of Colonna di Palestrina until the 15th century, it passed into the hands of the Cesarini family and in the 17th century served as a prison. Today, it is possible to visit the narrow room of the cell, below which are traces of a cistern dating back to Roman times, devoid of the traditional earthenware covering, and, perhaps for this reason, all the more evocative.

Less than 100 metres away from the medieval tower, the journey of our ‘grand tourist’ into Lanuvio ends at Via Sforza Cesarini where the scenic Fountain of the Rocks is located. Built in 1675 by architect Carlo Fontana on commission from Filippo Cesarini, it is thought to be a replica of Bernini’s Fountain of the Four Rivers in Piazza Navona in Rome. Originally, the fountain had two huge snakes on either side of the rocks, linking it with the cult of Juno Sospita.

From Lanuvio in the territory of the Castelli Romani, the visitor can move along the Roman coast towards Pomezia to trace the town’s history in reverse. The first stop is the Aulic Nucleus of the City of Foundation in Piazza Indipendenza, the centre of Pomezia’s mussolinian founding. Here the tourist can reconstruct the history of the city’s historic centre whose architectural complex was designed and built according to the principles of Italian Rationalism between 1938 and 1939 by the architects Petrucci, Luciano, Paolino and Silenzi. The Civic Tower and the Church of San Benedetto Abate, both characterised by a strongly rationalist style, overlook this same square. Continuing along the more contemporary history of the city, the tourist in search of the origins of ancient Lavinium will head to Largo Catone where they will discover the Ugo Tognazzi Municipal Library building. Along its outer walls the street artist Agostino Iacurci has created a lively mural entitled L’Antiporta in which stories and symbols from the Aeneid are interwoven, recalling the mythical foundation of the city. The traveller can finally conclude the journey by going to the Lavinium Archaeological Museum in Via Pratica di Mare, where they can observe numerous votive materials from the Sanctuary of the XIII Altars which are linked to the mythical Virgilian hero, as well as the remains of the so-called Heroon of Aeneas, a tomb belonging to an important personage from the 7th century BC, invariably associated with the figure of the Trojan hero. But it was not only male heroes who symbolised ancient Lavinium – there were also female goddesses. One such example is the goddess Minerva Tritonia, to whom an important sanctuary was dedicated and to whose cult many terracotta statues dating between the 5th and 3rd centuries BC are associated, and whose statue welcomes the visitor to the museum. 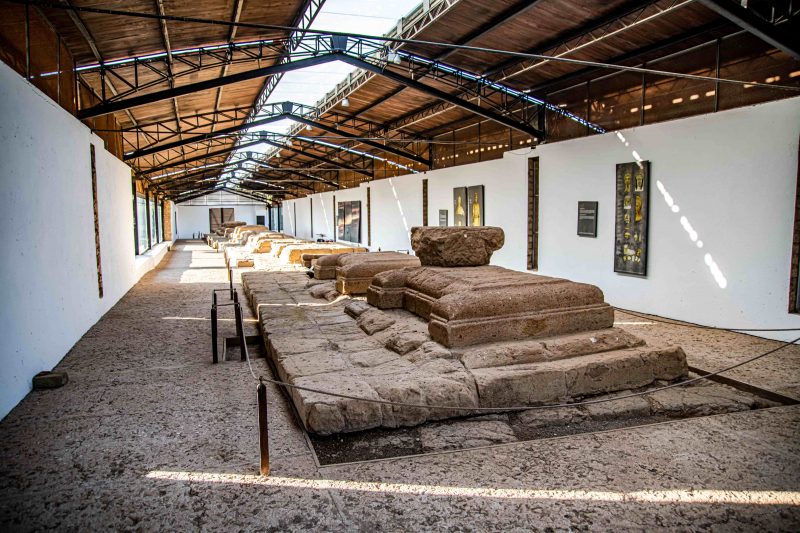 – One cannot visit Lanuvio without tasting ‘maza’, a savoury flatbread linked to the cult of the Serpent of Juno Sospita in ancient times. On appointed days, consecrated virgins would enter the forest blindfolded bearing a flatbread to give to the serpent. Tradition has it that the serpent would accept the offering only if the young women were truly virgins.

– Concluding their tour at Pomezia, visitors should make a final visit, accompanied by the guides of the Civic Museum, to the sacred area of the XIII Altars and see first-hand the Heroon of Aeneas in order to better understand its history and origin. 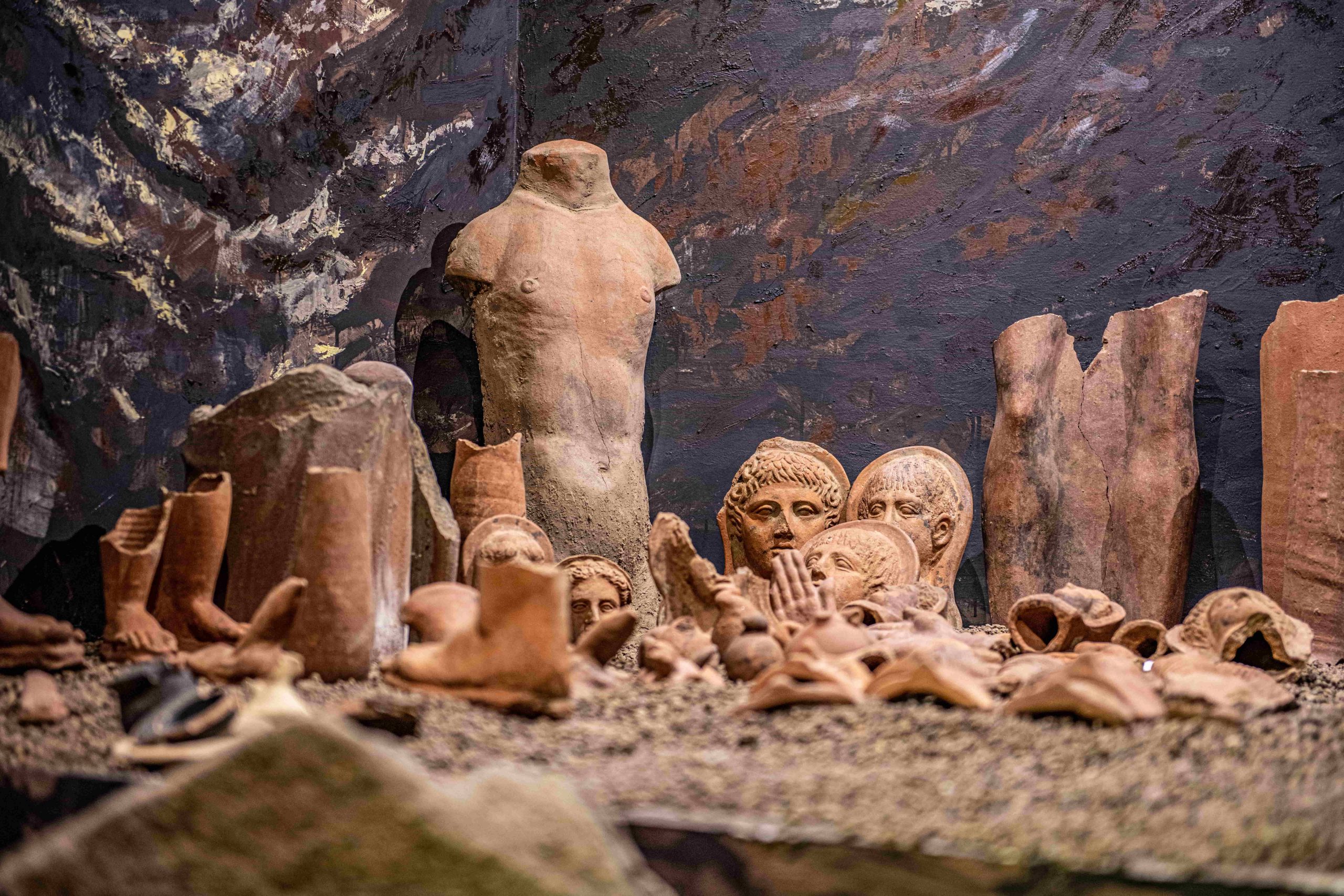 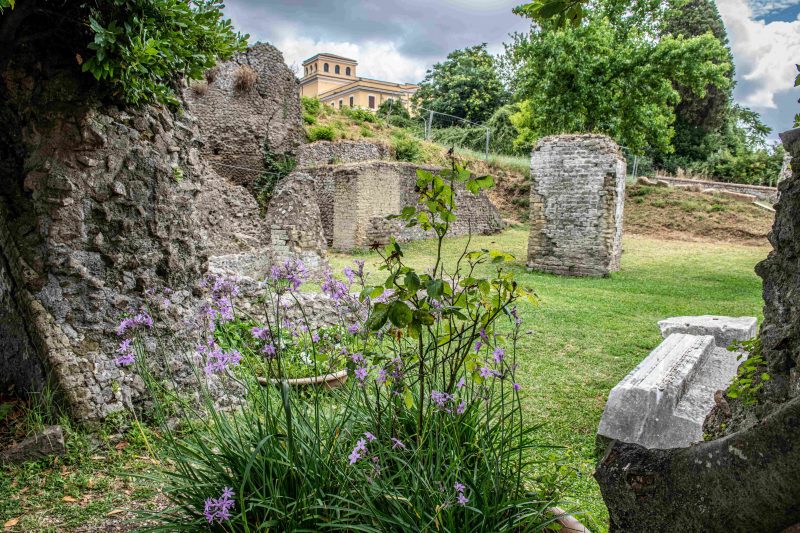